Witness for Peace Northwest and Southwest Region were thrilled to host this webinar with Daisy Rojas, a Cuban social justice activist and organizer who is a founding member of the Martin Luther King Jr Center in Havana.

Daisy  traveled throughout Washington and Oregon in October speaking about what daily life is like as a Cuban citizen under the U.S. economic embargo and travel ban. Daisy spoke about what steps we can take in the U.S. to act in solidarity with Cuba.  Her work with the MLK Center includes popular education in the Freire model, organizing with communities of faith, and solidarity work with international delegations. 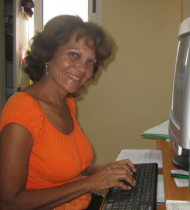 As one of the founders of the Martin Luther King Jr Center, the largest non-governmental organization in Cuba, Daisy is an incredibly well-respected organizer throughout thecountry. The MLK Center is Witness for Peace’s primary partner in Havana, serving as a popular education and solidarity center through which we organize our delegations. Daisy is an admirer of the philosphy of Paolo Freire and is instrumental in the MLK Center’s popular education efforts. As an active member of her church she has worked in many different roles, including liturgy, education, and community projects

Daisy Rojas, coordinator of the Solidarity Program of the Martin Luther King Center in Cuba, has lived through many U.S. elections.  She has learned to temper her hope for a new U.S. policy toward Cuba with realism.  After 47 years of the same old, worn-out, futile, draconian U.S. policy toward her nation she knows better than to hold her breath, hoping that a new administration and/or Congress might try a new approach.

Daisy has seen the dramatic effects of the U.S. economic embargo that has deprived many Cubans of needed medicines, technology and has isolated the island from many parts of the world.  Daisy emphasizes, “If the U.S. respected Cuba, the interventionist measures would end…measures that impede development, the ability to freely trade our products, that restrict our access to specialized research in health, science and sports. [These restrictions] don’t just hurt Cuba, but research in general.”

Daisy has seen families torn apart by the severe restrictions on travel from the U.S. to Cuba.  She has felt it personally: her son lives in Miami and cannot freely travel to see her. She says, “Cuban children in the U.S. can’t visit their mothers even if they are dying because there are laws that restrict visits to once every three years.  Families are a sacred part of U.S. society, so how can they pass laws that assault and tear apart Cuban families?”

All this pain and suffering has served no purpose.  This policy has been a complete failure on all accounts; it has not achieved its goal of changing the political system in Cuba, and it won’t work in the future.

Respect, Equality, Dialogue, and an Opening in Relations

Daisy’s realism doesn’t lead to cynicism.  She shares what a new policy could look like. She believes there can be a new policy.  In fact she has faith that it could happen soon.  The policy she envisions would immediately do away with the current embargo and travel restrictions.

Daisy says, “A new policy would be based on respect for our sovereignty, which would imply the end of interference in our internal affairs.  Respect would mean the end of a concept of democracy based only on elections rather than taking into account that democracy also means that a government has programs that take care of the needs of its people.  Respect would mean an end to the hostility which results in legislation that separates the people of the U.S. from Cubans, denying us the possibility of exchanging ideas, of freely visiting each other.”

She hopes that the new administration would be open to dialogue.  “I would like to see a real interest in a dialogue where our governments sit down as equals, as sovereign nations, free and independent.  In such a dialogue there can be no impositions, threats, subordination or hate.”

Daisy’s vision of a new policy includes Guantánamo. “The U.S. should leave Guantánamo, part of Cuba’s territory.  The U.S. has made Guantánamo a living hell for hundreds of prisoners that suffer the cruelty of the U.S. army without having been charged for crimes.”

She knows that this new policy would put a new administration or Congress at odds with parts of the Cuban community in Miami.  “It is unbelievable that a powerful government such as the United States would let a small interest group dictate its policies toward a whole nation. This group is full of hate and vengeance against the people of their native country.”

Calling on People of Conscience and Faith

Daisy minces no words when she talks about the responsibility of U.S. citizens in bringing about this policy change. She challenges people of faith and conscience to be peacemakers, to have a “hunger and thirst for justice”.  “I invite you to not be indifferent to the internal and external policies of your government.  Look deeply for the causes of the conflict between your government and ours.  Read between the lines, take offence when your government twists the truth.  When you know that something is not right, when your government is committing an injustice, do not give up—demand that it change.

“When they tell you that Cubans are miserable, accept the challenge and visit Cuba to see for yourself what kind of misery this is.  Even though we have so many limitations we have never stopped having a positive approach toward life, with the hope and desire to help other countries while asking for nothing in return.

“I ask that those of you who pray, to pray.  I ask all of you to reflect, to act, and to visit us.  If you consider us your brothers and sisters, you will ask your government to change its policy.”