ON Dec 17, 2014 Cubans celebrate the return of the Cuban Five

A day after President Obama announces historic steps in normalization of relations with Cuba he signs US sanctions on Venezuela. While many of us celebrate significant movement in US-Cuba relations we still have a very solid economic embargo and travel ban in place with our island neighbor. Now we have expanded our list of sanctioned countries in Latin America to two. While the Venezuela sanctions bill does not include economic sanctions or travel bans yet, its not for lack of trying by the bill’s authors. Not coincidently the same Cuban-American congresspersons that are furious with President Obama for easing relations with Cuba are the same that have been pushing Cuba style sanctions on Venezuela. The House version of the Venezuela sanctions bill authored by extreme reactionary Cuban American Rep. Ileana Ros Lehtinen has the same name as the Helms Burton Act (a bill passed to punish other countries for doing business with Cuba), with only the name of Cuba replaced by Venezuela: the Venezuelan Liberty and Democratic Solidarity Act. It contains three different forms of sanctions, a statement of policy for reducing oil imports from Venezuela and a “strategy” section that recycles various passages from the Helms Burton Act including the demand that Venezuela move “toward a market-oriented economic system based on the right to own and enjoy property” and make “constitutional changes that would ensure regular free and fair elections.”

On Monday Dec 15, Venezuelans march to reject US Intervention.

This past Monday thousands of Venezuelans marched to reject US intervention and to celebrate the 15 year anniversary of the Bolivarian constitution, one of the most progressive in the world which includes reforms like social security benefits for stay at home moms and full recognition of indigenous peoples and afro-descendants.

The passing of US Sanctions on Venezuela at the height of US police brutality protests and CIA torture reports is case in point of US hypocrisy and interventionist policies in Latin America while ignoring glaring human rights abuses at home and among key US allies like Mexico, Honduras and Colombia. The US has funded over a billion dollars in recent years to the Mexican military and police under the guise of the US Drug War and has trained thousands of Mexican security forces at the infamous US Army School of the Americas (long known for its own torture manuals). The case of the 43 missing Mexican students of Ayozinapa killed at the complicity of Mexican security forces and drug cartels is a blatant example of the failed US drug war that has helped fuel gross and massive human rights abuses across Mexico where the impunity rate is 95-98%.

14 years and 7 billion dollars later of US Plan Colombia spending and the training of over 10,000 Colombian military officials has left Colombia with one of the worst human rights records in the hemisphere and an internal refugee crisis only second to Syria. In addition, the US has continued US military and police training and funding of Honduran security forces even after a 2009 coup d’etat unleashed a killing spree of over 300 political activists where Honduran military and police were either complicit, looked the other way or failed to investigate the assassinations. The US has not called for sanctions against Mexico, Honduras or Colombia but has rather continued to fund their militaries and police with billions of US tax payer dollars and even brokered free trade deals with all three nations.

Cuban American -US congresspersons like Senator Menendez and Rep. Ileana Ros-Lehtinen, who have long held the responsibility for the hold up in normalization of US-Cuban relations, have accused Venezuela of cracking down on street protests earlier this year. While US streets are aflame over rampant police brutality and impunity the US might want to actually learn a thing or two from Venezuela’s widespread police reforms enacted since 2009. All Venezuelan security forces are required to receive human rights training and graduate from university level education. Earlier this year right wing violent protests in Venezuela were responsible for the deaths of over 40 people, many of which were pro-government demonstrators, members of the Venezuelan National Guard and innocent bystanders. The President of Venezuela’s National assembly states, “our government responded with restraint, allowing those violent demonstrations to go on for several months. Every effort was made to ensure that only protesters who directly violated laws or placed the lives of others in danger were detained. For example, those responsible for burning public buses with Molotov cocktails, or who set fire to a public university, were rightly arrested and charged — as were 17 state security agents accused of using excessive force against protesters, who are awaiting trial.”

The recent release of the Cuban Five and steps towards normalization of relations between the US and Cuba’s 50+ year stalemate should be an example of why we as US citizens cannot let Venezuela become the United States’ new “Cuba.” The United States is increasingly being shut out of Latin American alliances like the Summit of the Americas, ALBA and CELAC due to its bullying tactics against countries like Cuba and Venezuela. Several Latin American nations agreed to boycott the upcoming 2015 Summit of the Americas if the US continued to block Cuba’s participation. 10 Latin American nations have already rejected the threat of US sanctions on Venezuela.

Venezuela is a strong unifying leader in Latin America and if the United States continues its hostility towards Venezuela, the US itself may find itself blockaded by its closest Southern neighbors.

Witness for Peace Southwest sponsored 3 fact finding delegations to Venezuela in 2014 and works towards a more just and humane US policy towards Latin America. 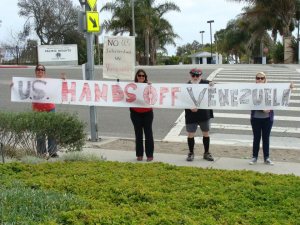