In October, Witness for Peace Southwest toured with organizers Maria Gabriela Del Pilar Blanco and Paola Martucci Gomez of the Revolutionary Sex and Gender Diversity Alliance (ASGDRe) from Venezuela. These two young queer women shed light on the current political, economic and social conditions facing Venezuela’s Bolivarian Revolution. We toured five states across the West including: California, Arizona, New Mexico, Oregon and Washington. We stopped in eleven cities and towns and hosted events with dozens more organizations, autonomous spaces and universities. Check out some pictures from our speaker’s tour! You can also review here 20+ videos of greetings from across the Southwest with organizers and organizations we visited in addition to SW’s reflections during the tour. Shortly, we’ll be posting a list of resources, other materials and actions that you can take to stand in solidarity with the people of Venezuelan and larger Latin American liberation movements. FMI: jcharles.wfpsw@gmail.com

Our first event was held at La Casa Roja in Mid-City Los Angeles with freedom fighters from across Central America.

Students at Scripps College and the wider Claremont Consortium participated in two days worth of events in classroom spaces. Student organizations also hosted a student of color and student organizers’ lunch discussion.

Gaby and Paola spoke with dozens of students with the Central American Studies department at California State University Northridge (CSUN).

Paola and Gaby visited a variety of spaces that challenge police brutality and state sanctioned violence in the US against majority Black and Brown bodies. Here, they took a picture in homage to Oscar Grant who was brutality assassinated at this very Fruitvale statement in Oakland.

We debriefed with organizers from PUENTE, an immigrants rights organization in Phoenix, Arizona ahead of the SOAW convergence on the border in Nogales, Arizona/Mexico.

In Oakland we met with a political education group focusing on liberation movements across the Americas. We also attended the Black Panther Party’s 50th Anniversary celebrations.

Ethnic Studies Department at San Francisco State University turned out more than 50 students to listen to the current events from Venezuela and the achievements and challenges for queer and feminist organizers. 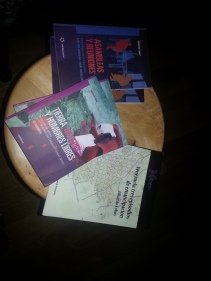 Literature directly from Venezuela was for sale throughout the entire speaker’s tour!

El Comalito Collective collaborated with a variety of events in Vallejo and Napa Valley including a Sip + Paint fundraiser in addition to a food sovereignty and food justice event and LGBTQ movements in the Americas.