Witness for Peace Southwest in partnership with the Alliance for Global Justice and No More Deaths presented two educational webinars on the current state of private profiteering on the US/ Mexico border and border imperialism. If you missed the chance to catch them live, you can watch the recording below!

More Than A Wall Webinar:

Featuring acclaimed author and journalist Todd Miller and media coordinator for No More Deaths, Paige Corich-Kleim. In this webinar Paige and Todd discuss the report More Than A Wall in order to examine the role of the world’s largest arms, security and information technology in shaping and profiting from the militarization of US borders.

In this second webinar Todd Miller spoke on his new book Empire of Borders, about the expansion and imperialism of the US border regime, along with Nellie Jo David J.D., an activist and educator and  co-founder of the O’odham Anti-Border Collective who spoke to the ways this ongoing colonialism is playing out in the traditional Tohono O’odham lands of the US/Mexico border.

APPLY FOR THIS DELEGATION TODAY 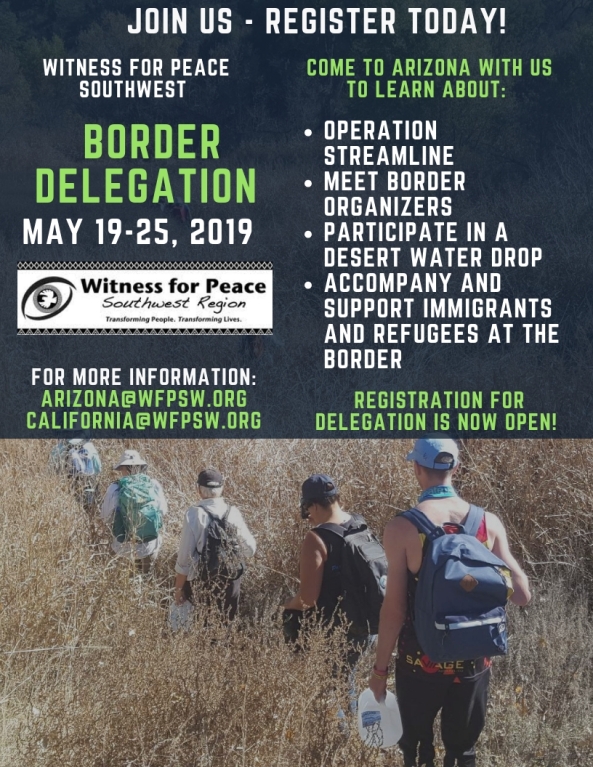 Moving Congress: In theSouthwest region secured 6 of 87 congressional signers on a Dear Colleague letter condemning human rights abuses in Honduras. On the Colombia Free Trade Agreement 4 congresspersons were swayed to vote NO through Southwest region efforts in October. WFPSW rallies were held at 3 Southern California undecided congressional offices a day before the free trade votes. 2 of the 3 reps voted against the free trade agreements the next day. Through grassroots pressure, this December Rep. Berman CA-28, ranking Democrat in the House Foreign Relations committee sent a public letter to Secretary Clinton questioning US funding of state sponsored repression in Honduras. This next year we will be bird-dogging congress during election campaigns to make sure they address the failed Drug War, Honduras human rights violations, the Cuban Embargo and immigration reform. (pictured WFPSW members at Rep. Henry Waxman’s office)

Honduras– The Southwest Region joined protests at the Honduran Consulate in the spring when there was a brutal military/police crack down on teacher/students protests that lead to the death of elementary school teacher Ilse Ivania Velásquez Rodríguez. In March the Southwest region hosted Gerardo Torres, leader of the Honduran Resistance Front, for several speaking events in Southern California. In September the Southwest region sent a nine-person delegation to Honduras that visited the campesino movements of the Aguan Valley, 4 political prisoners, served as international observers for the Sept 15 Resistance marches and met with the brand new US Ambassador to Honduras. The Southwest hosted Afro-Honduran Garifuna Doctor Luther Castillo for a workshop on Honduras at the School of the Americas vigil in Ft. Benning, Georgia. The Southwest continues to be an active member of the Honduras Solidarity Network. In 2012 we plan to send more protective accompaniment delegations to Honduras, push for more cuts in US funding and get a Dear Colleague letter circulating in the Senate.(pictured: delegate Sara Kohgadai with former Honduran President Mel Zelaya.)

Trade- Three free trade agreements came to a vote  for Colombia, Panama and South Korea. The Southwest held face to face meetings with several congressional offices in the spring in which reps committed to vote against the FTAs. During the final votes many reps spoke out strongly against the FTAs on the floor of the Senate and House. In the end 80% of House Democrats voted against the Colombia FTA and most significantly against a specific ask by President Obama to pass the trade agreements. In 2012 election season we will be holding reps accountable for their votes on the FTAs and will push for more congressional co-sponsors for the Trade Act, a bill that will stop any new FTAs and renegotiate all current FTAs. (pictured: rally at Rep. Karen Bass’ office. She voted against all 3 FTAs)

Colombia- In the Spring the Southwest hosted events for the Days and Prayer and Action on Colombia, in July we sent an accompaniment delegation to the humanitarian peace communities of Uraba, Colombia and in the fall we lobbied against the Colombia FTA and hosted Jani Silva, campesina leader from Putumayo, Colombia on a speaking tour that reached over 1000 people. In 2012 we will send protective accompaniment delegations to Uraba, Colombia and continue to raise awareness in the US of the failed drug war model. (pictured Southwest delegates in Uraba, Colombia)

Migrant Rights- In January we hosted the first domestic delegation on immigration and migrant rights in Ventura County, California. We co-sponsored multiple migrant rights forums and participated in campaigns to stop ICE’s Secure Communities Program. In the summer the Southwest sent volunteers to deliver water and humanitarian aid at the Arizona/Mexico border with the human rights group No More Deaths. In 2012 we will return to volunteer on the border, flight for an end to ICE’s S-COMM program and participate in migrant rights forums and Know Your Rights Trainings. (pictured: volunteers with No More Deaths take a break in the Arizona/Mexico desert.)

Cuba– the Southwest has participated in the efforts to protect Cuban family travel. Hardline Cuban Americans in congress twice this year have tried to roll back travel for Cuban Americans to Bush era policy. In December the Southwest sent 28 delegates to Cuba ranging from ages 24-76 and representing 18 states. This coming year we will support the campaign to Free the Cuban Five, organize delegations to Cuba and lobby to end the travel ban and embargo on Cuba. (pictured: International Workers Day march in Havana, Cuba)

Delegations– The Southwest sponsored 4 delegations to Honduras, Colombia, Cuba and Ventura County, CA. A total of 55

delegates participated and the Southwest Region awarded $3,175 in delegation scholarship assistance. In 2012 we have delegations planned for Honduras, Colombia, Cuba and domestic California and Arizona delegations on migrant rights. We also will be facilitating more short term and long term volunteer accompaniment teams in Uraba, Colombia and the Aguan Valley of Honduras. (pictured: Southwest region’s first domestic delegation focused on farmworkers and migrant rights in California.)

They call me El Chavo, and I was born and raised on the coastal city of Chiques (aka Oxnard, CA), territorio ocupado del Pueblo Chumash.

I am an organizer in the barrio… organizando spaces of resistance with la gente de abajo y a la izquierda against repression in all its forms. Soy indigena, descendant of various pueblos orginarios on this continent, Guachichile, Juchipila, Coahuila roots. Mexicano, cien porciento. Aqui estamos..y no nos vamos.

I taught middle school math and reading for 10 years, now I currently am the Events Coordinator at the Acuña Gallery and Cultural Center at Cafe on “A” in Downtown Oxnard.

As part of my commitment as a community organizer and activist I organize with Unión del Barrio and serve on the Raza Press and Media Association Editorial Board and on the Witness for Peace Southwest Regional Board and an active participant in the Todo Poder al Pueblo Collective.

The following poem was inspired by a report published last week by the organization No More Deaths. It is a report that details the “abuse, negligence and dehumanization of migrants as part of the institutional culture of the U.S. Border Patrol…”

I would like everyone to read this report, called Culture of Cruelty. I hope it makes us think, get together, organize and fight these catastrophic violations. We are one people, Without Borders!

-Chavo
From the occupied territories of the Chumash People

Interview with Francisco “Chavo” Romero, community activist, and Tanya Cole, Witness for Peace organizer. Discuss immigrant rights and workers rights, including militarization of the border and our communities.

Part 2 of interview with Tanya Cole, Witness for Peace Southwest District organizer, and Cindy Piester of Pulse TV. Discuss the history of U.S. involvement in Central America and migration and immigration.

Refresh yourself on the CIA’s role of replacing democratically elected Latin governments after overthrowing them, and the brutal campaigns of repression that followed.

Grim history in broad strokes. An update in current ways and means of the U.S. governments continued efforts to control through violence.