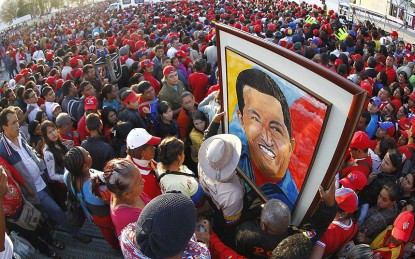 Venezuela is at the forefront of revolutionary movements in the Americas. This webinar comes one year after the passing of revolutionary leader and former President Hugo Chávez. More than ever the Venezuelan people and countries across the Americas continue to support the Bolivarian and socialist project that he and the people championed. And more recently, this informative webinar comes as an act of resistance and solidarity following the right wing opposition´s violent attempts to overthrow the democratically elected Venezuelan government of Nicolás Maduro and garner international support for foreign, namely US, intervention. This webinar will be an on the ground live report by Caracas based Jeanette Charles, board member of Witness for Peace Southwest and newly appointed correspondent for Telesur-English. Information will be provided on how to join a WFPSW fact finding delegation to Venezuela in May and July of this year. Also we will discuss what we can do here at home in the U.S to stand in solidarity with the Bolivarian process and prevent US interference and US Media misrepresentation of the Venezuelan democratic process.

Presenter: Jeanette Charles is a grassroots educator, writer and youth organizer from Los Angeles, California. Member of the Chiapas Support Committee and board member for Witness for Peace Southwest. Jeanette has spent considerable time in and across the continental Americas with Afro and indigenous communities as well as popular media collectives. Jeanette is currently located in Caracas, Venezuela and recently became a correspondent for Telesur-English. Jeanette will lead the May WFPSW delegation to Venezuela.

Facilitator- Tanya Cole is Director of Witness for Peace Southwest based in the states of California, Arizona and New Mexico. WFPSW will be hosting 2 upcoming delegations to Venezuela in May and July.

Below are the conference details.

The conference has audio and visual options available.

1. For audio every participant must takes these steps:

From your phone call the conference call number: 1-646-307-1300 (East Coast)
You will be asked to enter an access code. Enter the code : 630087 followed by the # sign. You will now enter the conference. You will hear an announcement that the call is being recorded. (we hope to have a recording available for participants after the call)
All participants will be muted except for the organizers. To un-mute yourself in order to comment or ask a question press *6 on your phone.

You will enter a website where the organizers will be guiding you through photos and written reports while you listen on the phone conference audio line. You can ask questions via chat and use the “Raise Your Hand” feature to let organizers know you have a question or comment.

Afterwards we will have the materials and a recording of the call available for participants. The recommended registration fee is $10 but no one is turned away for lack of funds. Payment can be made online or by check here: https://wfpsw.org/donate-today/

A packet of materials with background articles on Venezuela is available. Thank you for joining us! 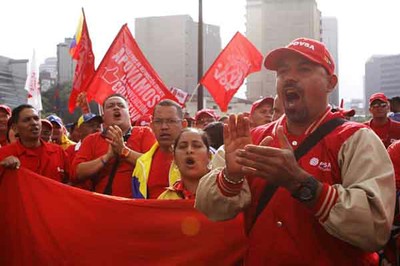 17 February 2014 – Caracas, Venezuela – In February, the Venezuelan people celebrate a rebellious and revolutionary history. February marks the 1992 attempted government takeover organized by military and civil society under the leadership of Hugo Rafael Chavéz Frías, inspired by the Caracazo, the 1989 neoliberal economic crisis that drove the Venezuelan poor into extreme poverty and where the military repressed, disappeared and assassinated thousands.

This year, Venezuela honors the bicentennial of the youth movement, a trajectory of independence, communist and ultimately anti-imperialist revolutionary movements. However, the right wing opposition in Venezuela has terrorized the people with an onslaught of violence and threats to topple the democratically elected and self-declared Chavista working class government under President Nicolás Maduro Moros.

Late Sunday evening, President Maduro along with National Assembly President Diosdado Cabello and foreign relations minister Elias Jaua, recounted the last few days of destruction, international media manipulation and violence against the Venezuelan people led by opposition leaders Leopoldo López and Henrique Capriles Radonski, both involved in the 2002 coup attempt against then President Hugo Chávez. President Maduro emphasized, “We are facing crazy people without moral or ethical limits…the people of Chavez have risen up and have decided to be free,” reiterating that Venezuela does not take orders from anyone except the Venezuelan people and is not a US colony, following comments from US State Department official Alexander Lee.

On Wednesday, during the National Youth March, opposition students marched to Parque Carabobo in the Capital of Caracas carrying with them molotov bombs, hardware tools and weapons. They took to the Public Prosecutor’s headquarters and set cars on fire as well as attacked the building threatening the lives of people nearby and workers at this public institution. On Wednesday, three were left dead in the capital including one police officer, a pedestrian and a militant organizer, Juan Montoya “Juancho”, from the barrio of 23 de enero on the capital’s west side, overwhelmingly organized working class and poor. Across the country there have been attacks against known socialist programs and Venezuelan government institutions.

Since Wednesday, the Venezuelan people continue to mobilize resisting the opposition’s violence. This Saturday was the Peace and Justice March and National Youth March concentrated in Caracas. Music and political chants dominated the city where families, communities and their movements continued to march in the name of their revolutionary spirit in spite of the week’s violence.

There is currently a warrant for the arrest and capture of Leopoldo López. President Maduro has expelled three more US diplomats. They are claimed to have participated in opposition meetings in support of a coup d’etat. They have also been seen at several private universities in Venezuela offering youth visas to the United States. (For more information: http://www.ciudadccs.info/?p=534169)

At the close of January, the Community of Latin American and Caribbean States (CELAC in Spanish) met for their second gathering in La Habana, Cuba. The CELAC is the Latin American and Caribbean union, political, social, economic and cultural initiative to integrate the Americas without the participation of the United States and Canada. This year’s gathering ended with a declaration proclaiming the region free of military intervention in the name of peace and respectful diplomatic relations. The CELAC also opposed the US embargo to Cuba and included a provision to discuss further involvement of Puerto Rico, current US colony, potentially leading to a decolonization process as proposed by the Puerto Rican liberation movements. (To read Spanish version of declaration download here: http://celac.cubaminrex.cu/es/articulos/declaracion-final-de-la-ii-cumbre-de-la-celac)

In light of the right wing violence in Venezuela many nations across the world have declared their solidarity including Ecuador, the Association of Caribbean States and Argentina among others. There is a national march in the name of peace and in defense of the revolution on Tuesday February 18th. The opposition has also called for a mobilization however their march is not authorized.

-Jeanette Charles is from Los Angeles, CA currently residing in Venezuela. Jeanette is a board member of Witness for Peace Southwest and member of the Chiapas Support Committee.

For more news in English and Spanish:

Thursday April 11th marks the 11 year anniversary of the attempted coup against elected President Hugo Chavez. Two Days later on April 13th, 2002 in a historic moment for Latin America he returned to his office reversing the coup.

Since first coming into office in 1999 President Chavez had gone through numerous highly observed elections in which he was re-elected by an overwhelming majority of the popular vote. He recently was re-elected for President in October 2012. A controversial figure for some and a beloved President and leader for millions of Venezuelans, President Hugo Chavez succumbed to cancer last month.

New elections are taking place this Sunday April 14th in Venezuela where President Chavez’s sucessor Nicolas Maduro is expected to win. We know of the over decade long hostilities of the United States in trying to intervene in the democractic process in Venezuela and to undermine the alternative economic and political models that challenge US hegemony in the region.

This Thursday April 11th is an International Day of Action in solidarity with the Venezuelan People. As US Citizens we call for NO Intervention in Venezuela, Respect for Election Results, and an End to funding of Opposition groups.

Call the State Department’s Venezuela Desk at 202-647-4216 or email mcnamarajt@state.gov.

For congress contact the ranking members of the Foriegn Operations Sub-Committee and ask them to cut all US funding of opposition groups in Venezuela from the 2014 federal budget.

There will be events happening nationwide this week. For California events see below.